Calling all S.J. Maas and Susan Dennard fans, here is a series for you! Kate Avery Ellison, author of The Frost Chronicles, recently released the sixth in her epic fantasy, The Kingmakers’ War. Get ready for one swashbuckling adventure, but beware, there be dragons. Join us as We Write Fantasy celebrates Kate’s new release!

A Court of Lies

Book Six of The Kingmakers’ War 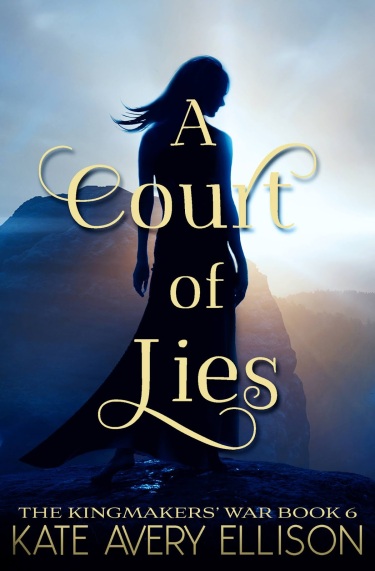 The 6th installment in the beloved Kingmakers’ War series!

The war continues to rage across Austrisia, and the players in the battle for the throne continue to employ magic, trickery, and political intrigue in their quest to rule the land. In the north, Briand takes the splintered throne as Guttersnipe the thief-queen, longing for the man she loves despite everything that has transpired. Prince Jehn prepares for his marriage in a dangerous foreign court. Meanwhile, Kael assembles an elite guard from across the country… and makes plans to pay a visit to a certain fierce, tempestuous thief-queen.

He can’t stay away. Even if she might end up putting a dagger through his heart.

See What People Are Already Saying…

From Book 1: Intrigue. Romance. Dragons. A must-read for fans of Throne of Glass, An Ember in the Ashes, and Game of Thrones!

As the orphaned niece of a cruel lord, Briand has always been too clever for her own good. She survives in a kingdom torn apart by civil war by looking out for herself. She has lots of enemies and no friends except her cousin, Bran. Nobody thinks she has any value, least of all her uncle.

But when she unexpectedly gains the power to control dragons with her mind, Briand is conscripted into a band of Monarchist rebel fighters on a dangerous mission. They want to use her powers to summon dragons to defeat the Usurper Prince and his army. Briand isn’t sure if she can trust their handsome, enigmatic leader, Kael. But she doesn’t have much of a choice.

She’ll need all of her cleverness just to make it out alive.

One thought on “New Release from Kate Avery Ellison!”