C.E. Laureano for
Days of Fantasy for Christmas

Oath of the Brotherhood
(Song of Seare #1)
By C.E. Laureano

In a kingdom where the Old Ways hold fast and a man’s worth lies entirely in his skill with the sword, Conor Mac Nir is a scholar, a musician, and a follower of the forbidden Balian faith: problematic for any man, but disastrous for the son of the king.

When Conor is sent as a hostage to a neighboring kingdom, he never expects to fall in love with the rival king’s sister, Aine. Nor does he suspect his gift with the harp (and Aine’s ability to heal) touches on the realm of magic. Then his clan begins a campaign to eliminate all Balians from the isle of Seare, putting his newfound home in peril and entangling him in a plot for control of the island that has been unfolding since long before his birth.

Only by committing himself to an ancient warrior brotherhood can Conor discover the part he’s meant to play in Seare’s future. But is he willing to sacrifice everything―even the woman he loves―to follow the path his God has laid before him?

King Galbraith had always loomed large in Conor’s memory, but he had chalked it up to a child’s outsized perceptions. Now, he realized his memories were accurate. Clad in a wolf’s-fur cloak with the steel crown of kingship upon his brow, the king nearly filled the throne. His waist-length hair, brown-blond like Conor’s, fell in warrior’s braids over his shoulder, and several plaits decorated his long beard. Beside him stood Lord Riocárd, Galbraith’s champion and captain of the guard, bearing the sword of kingship. The captain was a formidable man in his own right, fierce-eyed and broad-shouldered, but even he was dwarfed in his lord’s presence.

Conor looked away before his eyes could betray his anxiety—into the face of the only man he feared as much as his father. Lord Fergus, the king’s tanist, was an older, paunchier version of Galbraith, and he made the king seem downright warm by comparison. He took Conor in, a slow, predatory smile spreading across his face.

Beside him, a second man scrutinized him as one would observe an insect through glass, emotionless. The druid himself. Conor suppressed another shudder at the symbols of dark power tattooed on his neck and hands.

Conor tore his eyes away from the observers and moved forward to kneel on the lowest step, his eyes downcast. He pressed his trembling hands together in front of him.

He jerked his head up and stared forward while the king’s gaze roamed over him.

One corner of Galbraith’s mouth twisted in displeasure. “Tell me, have you started your training yet?”

Conor swallowed hard. “What training would that be, sir?”

“Don’t be clever with me. You know to what I refer. Sword, bow, spear.”

“No, my lord.” Conor’s voice came out strangled, forced from his constricted throat.

“Then what exactly have you been doing for the last nine years?”

“Studying?” Galbraith’s tone changed, a note of curiosity in it.

“I can read and write the common tongue, as well as Ciraean, Levantine, and Norin. My Melandran is passable, and I know a bit of the Odlum runes.”

Galbraith stared at him for a long moment. The hall fell silent but for the crackle of torches and the occasional rustle of a lady’s gown, every eye riveted on the spectacle before them. Then, in one swift movement, Galbraith reached over and ripped the sword from the scabbard in Riocárd’s hands. The ring of metal echoed in the hall as the blade stopped a fraction of an inch before Conor’s eyes.

“The only language our enemies understand is the language of the sword.” 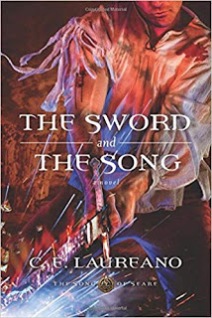 C.E. Laureano’s love of fantasy began with a trip through a magical wardrobe, and she has never looked back. She’s happiest when her day involves martial arts, swords, and a well-choreographed fight scene, though when pressed, she’ll admit to a love of theater and travel as well. Appropriately, she’s wife to a martial arts master and mom to two black belt/musician sons. They live in Denver, Colorado, where they are owned by a cat.