This week, we have a special dark fantasy Flash Fiction from Author K.D. Jones. On writing flash, K.D. says,

“I don’t do any plotting when I write micro fiction. I just start with an idea, usually a place, a person, or a thing, and just run with it, letting my imagination pull me in whatever direction it wants. Try it! I was surprised at how much I enjoyed writing micro fiction once I started.”

We hope you enjoy reading Krystle’s flights of fancy as much as we have. 😉 Happy reading!

The raven pecked at the skull’s empty eye socket, collecting pebbles and remnants of fine clothing for its nest high in the woods above. Gnarled tree limbs twisted and knotted against a sky black as pitch. Bones, both human and animal, hung from twine tangled in the branches, turning and singing in the chilled breeze.

A ghastly figure materialized out of thin air, emitting a garish green glow—a man, tall and lean, wearing robes of velvet and golden brocade, with a silver brooch thick with rubies at his throat. A crown lay on the dirt, rusted with rain and abandon. The figure’s chest ached at the sight, and he reached for it with skeletal fingers. They passed right through the crown. Again, he tried to grasp it. And again, failed.

All the while, the raven pecked and poked and gathered its macabre prize.

The specter shifted uneasily. Watching the bird desecrate the skull filled him up with dread, anger, and—

Anger? Why anger? His thoughts blurred and muddied together. Adrift, he sagged against a tree, clutched its rough bark for support. And felt nothing, not even a scrape beneath his palm. Curious, he ran lithe fingers over the velvet of his robes, feeling neither softness nor warmth.

The bird continued to peck.

He felt panicked and yet could not feel his pulse race or hear his breath catch. He was undeniably dead, and it both fascinated and frightened him, and how did he end up dead and would that damnable bird ever stop pecking—

With a moan, the specter swooped down upon the raven. It cawed loudly, flapping its oily-black wings in a frenzy to take flight. The specter watched it disappear into the night. He shifted mournful dark eyes to the skull. A shadow of what—who—he used to be.

He… That’s right. He knew who this was. Flashes of memories, of battles fought on blood-soaked fields, of a thousand swords dripping scarlet, flickered in and out of his head.

As if in a dream, he reached down to grab the skull. This time, his fingers connected with solid bone, and he lifted the skull up to gaze into its blackened eyes—his eyes.

How dreadful he looked. Where hair of flowing gold once crowned his head now showed the empty gray of cracked, weather-beaten bone. Teeth, once straight and whole, were now chipped or missing.

More prizes for the ravens.

His gold-plated armor was scratched and tarnished with dried blood and caked with mud. The sword that had impaled him still gleamed, as if freshly polished, pinning him to the cold, damp earth. And above, the clinking and whistling wind, which he swore mixed with the moans of the dying…

His army. His brothers and sisters in arms. All that remained of them was dust and bone.

Guilt and shame threatened to cleave him in two. He’d led them to death. He was their king, he knew the enemy was far too bold, too cunning, too ruthless and cruel, and yet he’d led them to slaughter anyway.

Tipping his head back, the specter released an agonized roar that shook the ground.

A flash of color caught his eye—a silk ribbon, blue as the sea. Wide-eyed, he watched it flutter and curl on the breeze, at last landing on the crown. It looked so out of place among the lifeless, dark misery around him.

A blue ribbon. The symbol for safety. Then his people… Had his people made it out of the country safely before the enemy arrived?

He sat straight up, clawing at every memory, fighting to remember.

To remember how he’d caught wind of the oncoming attack and ordered a city-wide evacuation.

To remember how he’d summoned all his knights and swore to defend the city walls against the invaders, for as long as they could, despite the knowledge their enemies outnumbered them six to one.

To remember how bravely they’d fought, fueled by their determination to keep fighting, to keep standing until every last man, woman, and child was safely beyond the borders, within the magical barriers of the neighboring kingdom. Safe from harm, free to live their lives out in peace.

He stared at the ribbon fluttering in the breeze. It was the messenger’s job to release ribbons once they made it safely across the border.

The evacuation had been successful. They had not died in vain. His duty as a king had been fulfilled.

And with that, the specter smiled with relief and vanished. 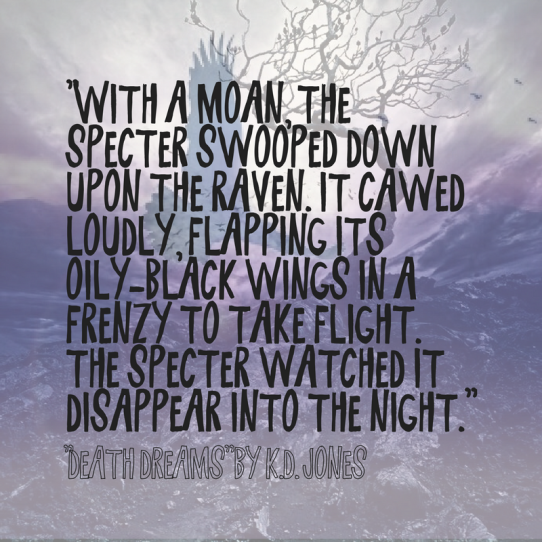 Think of it like a scene. Scenes are like micro stories—they have a beginning, a middle, and an end. The inciting incident will have to be a lot closer to the beginning of the story, if not the start of the story, but it may help to think of your micro story as having three distinct parts. George R. R. Martin does the “story within a scene” tactic quite well.