What is flash fiction? It’s an itty bitty story, generally under 1,000 words or 3 printed pages.

The magician wriggled her fingers over the cards scattered across the table. “All right, then,” she said to the king seated across from her. “Choose a card.”

He reached forward and plucked a card from the velvet tablecloth and handed it to her.

The magician didn’t glance at it as she promptly tossed it onto the table and pushed all the cards into a jumbled pile.

His jaw dropped and he gaped at her. “What did you do that for?”

“Ssh, ssh, ssh!” She leaned forward, her robes spilling over the cards, and thrust a finger upon his lips, silencing him. The guards behind the king shifted their weight, their gloved hands resting over the pommels of their swords.

“You’ll ruin my concentration, Your Majesty,” she said slyly, winking a coal-rimmed eye at him and smiling broadly. She leaned back slowly, making sure to give him a good glimpse of her just-too-low neckline.

His eyes trained where she’d wanted them to. Smiling and practically purring like a contented cat, she scooped up the deck, shuffled them with the efficiency of an expert card-dealer, and once more spread them in an arc upon the table. “My king,” she said, her hand gliding above the cards, from left to right. “Is this… yours?” She snatched one up and presented it to him, face out.

He leaned forward and squinted. His bushy brows drew together beneath his massive gold crown. “No, not at all! I had the Ace of Hearts!”

“Oh, bother. I’m sure it’s in here somewhere…” She reshuffled, repeated the process of spreading the cards wide. “Is… this it?”

“No, no, and no!” With a huff, the king stood up and slammed both fists on the table, making it rattle. “You’re a fraud! A liar! You don’t have any magic at all!”

She scoffed, pressing a hand to her chest. “I’ll have you know, I’m very good at my trade.”

“And what might that be? Because it isn’t magic! I’m leaving.”

She stood and rushed around the table as he turned to walk away, intercepting him. “Please, Your Majesty, I can make it up to…” She stopped and squinted at the collar of his tunic.

“Possibly,” she said, stepping closer. He didn’t move away as she reached up and plucked something from his collar. Her face lit up. “Your Majesty,” she said, holding it up to him, “it’s your card!”

“Impossible!” He snatched it out of her hand. His eyes went wide. He glanced at her, then back to the card and back to her again. Back and forth, back and forth. “How… how did you do this?”

And so she did, five more times, until the king was clapping with glee. “That’s marvelous! You’re stupendous!”

“Thank you, Your Majesty. You are too kind.”

The bell began to toll, and the king rose. “Well, it’s time for church. Won’t you join us, my dear?”

She stood and bowed her head. “No, sire. I find my faith is best served in the modest confines of my own dwelling.”

“Indeed. Here,” he said, removing a satchel from his cloak and retrieving a gold coin. “For you. A truly wonderful magician.”

A moment later, the door to the cottage closed.

Cloth rustled as a tall, handsome man removed an invisible cloak, making him seem as if he’d appeared out of nowhere. Which, she supposed, he had.

“I thought he would never leave!”

“Luckily for us, he stayed.” She stood and gave her husband a kiss. “How did we make out?”

“Let’s see…” He reached into his shoulder bag. “He had two coin satchels on him. I took the liberty of replacing the contents of one with rocks, in exchange for these beauties.” He dumped a pile of silver coins onto the table. “I also managed this…” He deposited a gold and ruby encrusted pocket watch on top of the coins. “And this.” A velvet box followed.

Intrigued, she picked it up and opened it. She gasped with joy.

“I thought it would look marvelous on you,” he said, removing the pearl necklace and draping it about her neck.

He stood behind her and kissed the top of her head as they gazed at their reflections in the mirror across the room. Firelight danced off their features.

She ran her fingertips along the glossy pearls, admiring them. Turning to face him, she wrapped her arms around his neck and smiled.

She kissed him. “Shall we get out of here before this cottage’s real owners come back? And before His Majesty realizes we’ve swindled him?”

“Yes, my darling, we shall.” He stepped back and offered his arm. “On to the next town?”

She took his arm and grinned. “On to the next adventure.” 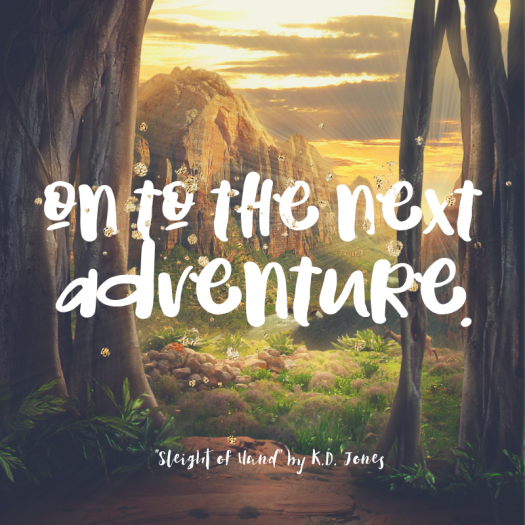 One thought on “Friday Flash Fiction with K.D. Jones”